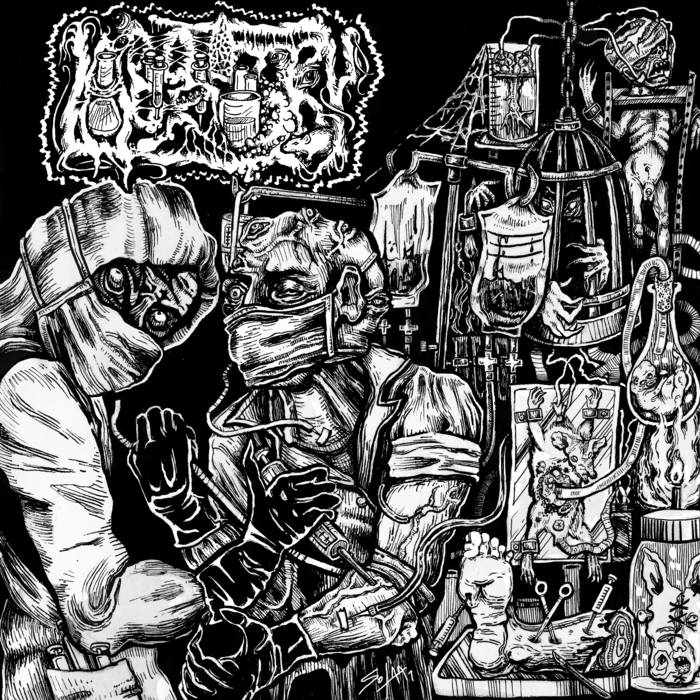 Each song on the EXPERIMENTS IN HUMAN DEPRAVITY ep is based on or inspired by actual events and experiments that were conducted usually involuntarily on a collection of for lack of a better term "human guinea pigs" The experiments in discussion were conducted depending on the song by either prison industries, various Governments, Militaries, Federal Drug Agencies or "men of science".These experiments were and should continue to be deemed unethical or at the very least highly unusual and bizarre.

LABORATORY is a interstate project whos members currently reside in Philadelphia and Columbus Ohio .
Due to travel The album was written and recorded in a span of 4 days in July of 2017

lyrics by Chelsea, Tom and Brandon

Track Name: EXPERIMENTS IN HUMAN DEPRAVITY
Experiments in Human Depravity:\
No compassion, no compromise\
experimental medicine or no medicine at all\
experiments in human depravity/ through our actions depravity will be defined
Track Name: XENOTRANPLANTATION FAILURES
Pig organ transplantation\
Goat testicles are attached\
Unnatural implantations\ Bestial rot/ inter species blood clot/ / zealous incision not the "aniamals" decision now the organs start to rot.
Track Name: 180 HOUR SLEEP DEPRIVATION TEST
No sleep in days\ I havent slept in days!
Deprivation, delirium\
Over stimulation, but deprivation\
what is happening to me?\ why is this happening to me?!!
Track Name: Acres OF SKIN
Fertile fields, human cattle\
All I saw before me were acres of skin, \
it was like a farmer seeing a fertile field for the first time\
Track Name: PROJECT GABRIEL
\
\
Call of the end, nuclear fallout\
radiation, nuclear human decay\
Horn of doom, death to all\
the final project, death to all\
\
Track Name: PLAGUE FLEAS
The itch\
So many fleas\
Tied to a tree, time to feed\ thousands chewing flesh
They just need to feed\
\
Track Name: PROJECT CHATTER
Thoughts within, mescaline\ the truth serum!
forced to truth, they will speak, project chatter\
inner secrets, all revealed, layers of truth will be peeled}

Bandcamp Daily  your guide to the world of Bandcamp

Featuring Oakland sounds from the Smart Bomb collective and Samplelov.